On a freezing cold night in January 2008, I woke up and went to the bathroom. My eyes could a glimpse of a light flash outside. Behind our house is a large meadow, and behind this is a neighbor’s house. It was completely dark outside. I looked out the window and saw a bright light flash illuminate the entire neighbor’s property, with house centered inside. It was an extremely bright light in the form of a large dome. I could see the house in all detail sitting inside of it. This light was not produced by human hands for several reasons. The dome had a sharp edge between light and dark. Human produced lights lose their intensity quickly with distance and this happens gradually. The intensity of the light was equal in all directions all the way up to the edge. Also, the light was extremely bright and intense.

The light dome was suddenly there, lasted for half a second, then suddenly all was dark for about three seconds, to reappear again. It repeated itself five times. Light bulbs, even the most strong spot lights, when turned on, have a gradual increase in intensity, and a gradual decrease when turned off. There is no doubt in my mind that this was not human made. It probably was a visual manifestation of electromagnetic earth energies rising to the surface.

When I mentioned my wife what I had seen, she told me that she had seen the same a couple of nights before. She had not mentioned it because she did not know what it was. 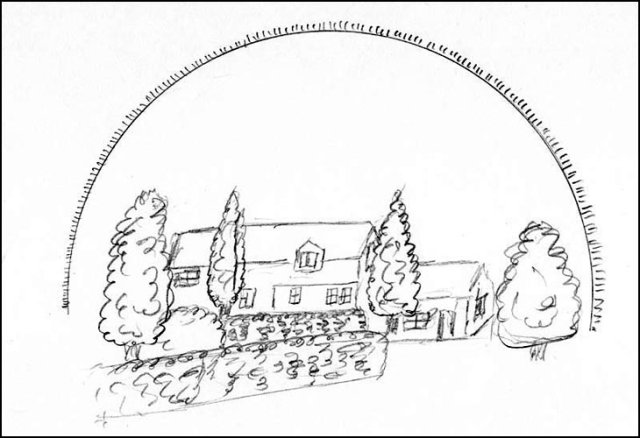 The light dome over the neighbor’s house

I am a life long spiritual seeker, exploring the mysteries of man, life, and the universe. I had many mystical experiences during my life. There is nothing spectacular about them. These experiences are often unexpected, and lie outside what we have been told is possible. They served to learn about the Greater Reality, that part of reality that is not talked about in school, government or corporation. Nevertheless it is very real, and a part of being human on this planet. I have studied many different doctrines and teachings, both esoteric and scientific. I have learned to see the common essence in all these disciplines, and the many connections between them. I have found that many people have spiritual, mystical or just unusual experiences they never talk about because of the many taboos this society has about certain subjects. However when they encounter someone they see they can trust they open up. It is time now for people to talk openly, and not to fear ridicule. I see it as my task to write about all these subjects and experiences that can enrich a person's life. Exchanging ideas, opinions, beliefs and experiences will bring us together and we will realize that we are not different from each other. It does not matter where you live on the earth, or what your cultural background is. If we pay attention to our humanness, then we can create a better world for all of us.
View all posts by Cosmick Traveler →
This entry was posted in cosmic beings and tagged beings, cosmic, dome, experiences, light, spiritual. Bookmark the permalink.