Posted on December 15, 2017 by Cosmick Traveler

The Padmanabhaswamy Temple is a Hindu temple situated in Thiruvananthapuram, Kerala, a province on the southwestern coast of India. The temple had different vaults. They have all been opened in the past, but one vault, whose doors are closed, is rumored to still have a lot of treasures in it. In spite of these rumors, the temple records presented to Vinod Rai, the 11th Comptroller and Auditor General of India, indicated that this vault has indeed been opened before; seven times in fact in recent history (twice in 1990 and another five times in 2002). The Travancore Royal Family, who are the custodians of the temple, however, pointed out that on those occasions, only the ante-chamber of the vault was opened, whilst the main chamber is still untouched. So, we still don’t know quite for sure what is in that vault.

It is not unusual for religious institutions to accumulate and store wealth. The above story made me think about a story I heard, more than twenty years ago, when I was still living in Belgium. I was working at the Royal Meteorological Institute. A colleague of mine was an older Cambodian guy, who had immigrated to Belgium a long time ago. One day he told me a story. When he was a child, he lived in the countryside of Cambodia, which was then a French colony. They knew of ancient Khmer temples in the jungle, but no one would ever approach these temples because they were haunted by spirits. The French army came by and they went straight to the temples. There they found large clay vessels which were filled with gold and silver coins. They smashed the clay pots and carted away the coins, never to heard of again.

Archaeology always happens after the looting.

That made me think of another story that happened a couple of years before. A building company was digging a big hole in the city of Brussels to put in a foundation for a new high rise building. During the excavation they stumbled upon 10 to 15 old crates all filled with silver coins from a couple of centuries ago. The company immediately put a fence around the area, and the alerted government put a police protection around the site. Next morning the crates were gone, the police guard didn’t notice anything, the government couldn’t investigate what is not there, and the media stopped reporting on the story.

It doesn’t matter how obvious it is, when you don’t talk about it, it didn’t exist.

Isn’t it amazing how wealth or discoveries of large gold or silver pieces always disappear or end up in the hands of governments? 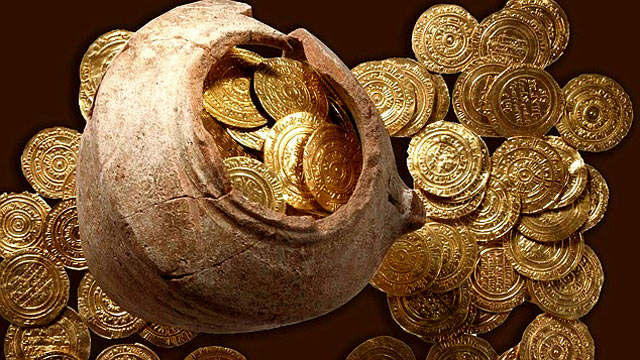 I am a life long spiritual seeker, exploring the mysteries of man, life, and the universe. I had many mystical experiences during my life. There is nothing spectacular about them. These experiences are often unexpected, and lie outside what we have been told is possible. They served to learn about the Greater Reality, that part of reality that is not talked about in school, government or corporation. Nevertheless it is very real, and a part of being human on this planet. I have studied many different doctrines and teachings, both esoteric and scientific. I have learned to see the common essence in all these disciplines, and the many connections between them. I have found that many people have spiritual, mystical or just unusual experiences they never talk about because of the many taboos this society has about certain subjects. However when they encounter someone they see they can trust they open up. It is time now for people to talk openly, and not to fear ridicule. I see it as my task to write about all these subjects and experiences that can enrich a person's life. Exchanging ideas, opinions, beliefs and experiences will bring us together and we will realize that we are not different from each other. It does not matter where you live on the earth, or what your cultural background is. If we pay attention to our humanness, then we can create a better world for all of us.
View all posts by Cosmick Traveler →
This entry was posted in Ancient Civilizations, treasures, Uncategorized and tagged gold coins, ruins, silver, treasures. Bookmark the permalink.

1 Response to Treasures tend to Disappear