back to Artwork by Dirk Gillabel

All images are copyright © by Dirk Gillabel

Here are my drawings based on ancient Mayan sculptures. I have always been very interested in the Mayan culture of Meso-America. They were such a diverse people, and I wondered what they looked like. We have sculptures, in stone, clay or otherwise of Mayan people. But a clay or stone figure is just that, I wanted to bring them alive. So I drew their faces guided by my intuition. I had to take the headdresses liberally as the original artist often simplified them, and also we do not know for sure what the hair dressings and ornaments all looked like. Most important was their faces, and it worked out quite well. You can judge for yourself what an interesting people they were.

Pay attention that some of the people have noses that start in the middle of the forehead. Quite unusual, more about that underneath the image gallery.

Yum Caax, the maize god, from a clay figure found in Copan. I thought I start with Yum Caax.  Maize or corn was the primary food of the Mayans, and was thought to be a gift from the god(s). Yum Caax is not only the god of corn, but also the the ideal beauty. This is how the Mayans imagined the most beautiful person to be.

Mayan: The eyes are oriental. There is still debate whether people from the Far East have settled America in the pre-Columbian days. We find more and more proof that the ancients have traveled all over the globe.

This one is more European looking.

Mayan Priest, JainaHe doesn’t look too happy. Judging from the wallets under his eyes, he must have had kidney problems.

Mayan priest from Jaina. The marks on his face are probably tattoos.

Another figure found at Jaina. 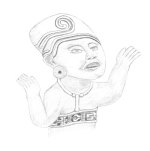 Totomaac. Happy figure. Probably priest or priestess summoning some good energies. The spiral on the headdress might indicate an active Crown Chakra.

From a clay head found in the Temple of Inscriptions, in Palenque.

From a mask found in the same temple.

From the Middle Coast.

Another Totomaac found in Vera Cruz.

A Zapotec, found in Monte Alban.

Olmec head at San Lorenzo.The Olmecs are the oldest Mayan tribe. They have strong Asiatic, or almost negroid features. The earliest Chinese art objects are adorned with features which bear a very strong resemblance with the Olmec art forms. The stone heads are huge, and probably represent rulers. As the stone heads rests on the soil, one can assume that their body is the land itself. This way it shows that the ruler is literally the land of which he rules. The seem to wear leather hats, each of which has different designs, probably giving his rank or status.

The Mystery of the Long-Noses

Well, I promised to give some more explanation about the long noses. When I was studying the Mayan culture I noticed that some of the figures had noses that started at the middle of the forehead. The nose line was straight and strong and it seemed to be a natural feature. The figures who had this feature all were rulers, religious or otherwise (in ancient culture the leaders often were priests too). Were those people from another race? I remembered that I once read in a scientific magazine that the Egyptian pharaohs had a unique blood type that only existed within their ranks. Where did this blood type come from?

I once went to a lecture by the world renowned Anton Vollemare, a Dutch anthropologist, who was famous for a major contribution to the deciphering of the Mayan hieroglyphs. I asked him about the long noses. Yes, he knew about it, but his explanation was that the aristocracy implanted a stone piece underneath the skin in order to elongate the nose for esthetic purposes. When I asked him if they had ever found these stone pieces with the skeletons, his answer was no…

Well, if they used these stone inserts, then they would have been found with the skeleton remains, wouldn’t they? Furthermore, The skin is very tight above the nose. They would have to cut open the skin in a straight line, place a stone piece in it and try to pull the skin over it, and sew it back together. I think it is not possible, besides being painful, even if you want to insert the stone piece through a small cut, and shuffle it upwards. Also, the area of the bridge of the nose is irregular, so try to cut a piece that will fall smoothly in place with the rise and fall of the nose, bridge of the nose and forehead, and make the line of the ‘artificial nose’ straight. Besides all that, you will have a good scar remaining too.

The important thing is that the supposed stone inserts have never been found. So what remains? I think it was a natural feature, and that those had this belonged to another race. Question is where did they come from. They were obviously more evolved as they only took leadership positions. Was it a result of inbreeding, or did they come from somewhere else? I’ll let you guess.

One more remark: biologically the length of the nose relates to the climate you live in (we are talking here in the evolution of species). The nose is rich in blood vessels which warm the air with each inhalation so the lungs don’t get too cold and catch colds. In colder climates the nose has to be longer because the inhaled air needs more warming. The very long noses of the Mayan aristocracy seem to point to a place with very, very cold air. Not exactly the climate of Middle America.