The Pedro mummy of Wyoming, USA

back to Physical Evidence of Humanoid Beings index 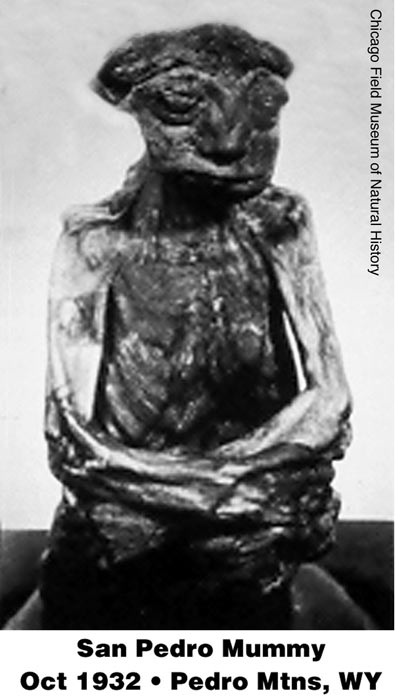 Pedro, the Mountain Mummy is a unique case. I present it here as a nice example of the existence of little human-like beings that have been or are still living on or in this planet. There are many stories of small beings who at one time went underground (literally) because they were abused by people. They took refuge in underground tunnels and cities.
In 1932 two men, Cecil Main and Frank Carr, spent a few weeks digging for gold in the San Pedro Mountains of Wyoming. After working a rich vein which seemed to keep continuing into the rock, they decided to use dynamite to blast a huge section of the mountainside off and save some time getting at more of the gold. After the dust from the blast cleared, they found that the rock face they had been chipping into led to a small cavern about 15 feet long and 4 feet high (4.5m x 1.2m). It had been totally sealed off from the outside world by a thick wall of rock, with no visible entrance or even small crack leading into it. Inside this cavern was a small ledge on which a pixie-like creature sat, cross-legged. It turned out to be a tiny mummy about 7 ” high (18 cm) with a total height of 14″ (35 cm). It’s face looked like an old man’s. It had a flat head, huge, heavy-lidded eyes and a very wide mouth. It was so well preserved that the finger nails could still be seen on the hands. It gets stranger – the top of it’s head was covered in a dark jelly-like substance. The prospectors carefully took their find to the huge town of Caspar, Wyoming where many prominent scientists, sure of a hoax, came from all over the US to have a look at it. 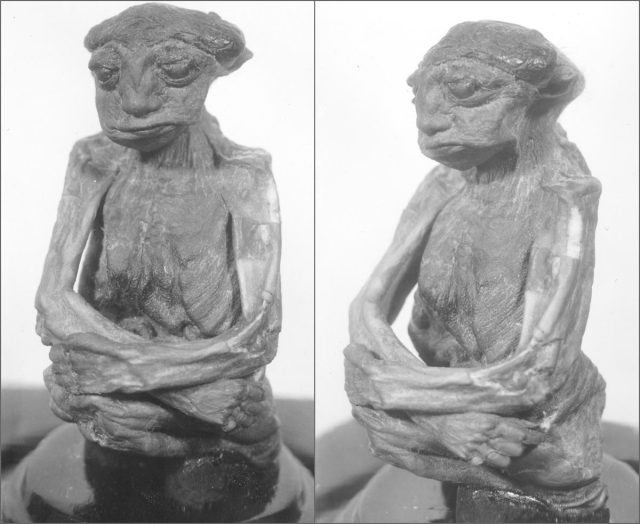 Dr. Henry Shapiro, an anthropologist from the American Museum of Natural History set up extensive tests, assuming it would show some type of doll or pieced-together work of taxidermy. Instead the X-rays showed that Pedro had inside him a perfectly formed manlike skeleton with a complete set of human-like ribs. Also shown was a damaged spine, a broken collarbone and that the skull had been smashed by a heavy blow. It seems Pedro had met with a violent death. The gelatinous substance on his head was exposed brain tissue and congealed blood. The fontanels – the soft spots in the skull which mesh to a solid plates as a baby matures to childhood – were closed, proving that this had indeed been a full grown adult.
Pedro had a full set of adult teeth but the odd difference overly pointed canines teeth. The overall estimate was that the being had been about 65 years old at the time of death and dated ‘far back into history’.

The Pedro Mountain Mummy made the rounds. Two years later, a sworn statement by Main shows the mummy belonged to a Homer F. Sherrill. At some point, it was owned by Floyd Jones, who had a drug store in the Wyoming town of Meeteetse. A young basketball player who visited the town at the time later recalled seeing the mummy in the drug store window. Jones sold postcards of the mummy to bring in some additional cash. It was a sideshow attraction.
Eventually it made its way to Ivan Goodman, a car dealer in Casper, not far from where the mummy was discovered. He showed off the mummy, by now seated atop a wooden base topped by a tall inverted glass jar.

Goodman featured the mummy in car advertisements, and apparently offered for display by others. A hype poster barked the claims: “It’s Educational! It’s Scientific! It will amaze and thrill you. It’s a pygmy preserved as it actually lived!”. The poster featured photos of the mummy and the x-rays of it, from the left and right. Goodman’s name was at the end of the tale, with a blank line to be filled in by whoever was displaying the mummy.

The mummy was lost about 1950. It’s not clear how, and press reports vary. Some claim Goodman took the mummy to New York City and lost it to a con man. Others say he sold it. Others say the mummy just vanished.