back to Elongated Skulls from Ancient Races on Earth 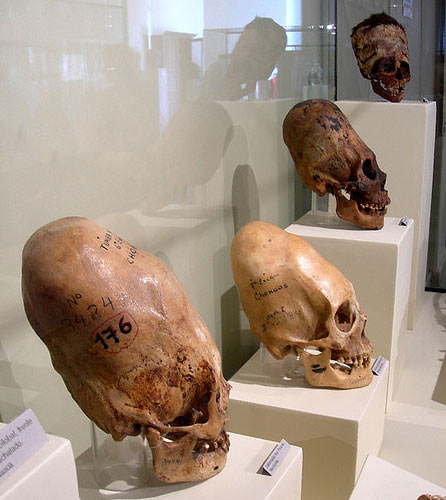 Many elongated skulls are displayed in several museums in Middle and South America, never examined by archaeologists.

Middle and South America have a lot of elongated skulls, of many different shapes. A lot of extreme long skulls have been found in Peru, in the Paracas region. These skulls belong to the Paracas culture which lived in the Ica region of Peru. Most information about the lives of the Paracas people comes from excavations at the large seaside Paracas site on the Paracas Peninsula, first investigated by the Peruvian archaeologist Julio Tello in the 1920s.

In 1927-1928 the archaeologist Tello excavated the northern side of the Cerro Colorado area of the Paracas Peninsula. In all, some 429 mummy bundles were recovered from two clusters at a site known as Wari Kayan, a large subterranean structure. The necropolis of Wari Kayan consisted of two clusters of hundreds of burials set closely together inside and around abandoned buildings on the steep north slope of Cerro Colorado. Each burial consisted of a conical textile-wrapped bundle, most containing a seated individual facing north across the bay of Paracas, next to offerings such as ceramics, foodstuffs, baskets and weapons. Each body was bound with cord to hold it in a seated position, before being wrapped in many layers of intricate, ornate, and finely woven textiles. The Paracas Necropolis embroideries are now known as some of the finest ever produced by Pre-Columbian Andean societies, and are the primary works of art by which Paracas is known. Burials at the necropolis of Wari Kayan continued until about 250 CE . because of the dry desert climate all the mummies and textiles are very well preserved. All the burials were of males and the quality of their grave gifts suggests that they were of high status; some have suggested that many of the men buried there had been brought for some distance to a special location, although this is not accepted by all.

The extreme long skulls from the Paracas region have gained a lot of attention, but there are long skulls of various types all over Peru and in other countries of South and Middle America. There are so many, and more are surfacing every year (by illegal digs and the increasing interest of the visiting westerners), that I have limited myself to pictures that are representative of the different types and forms of the long skull people.

I am starting this page with the Commonwealth of Dominica, to show that there are still people around with dolichocephalic, or long skulls. Here is a picture of a child with a natural long head. Picture taken by model Akii Lanier.

Reconstruction of a Peru woman with elongated skull. Image by Marcel Nyffenegger

Reconstruction of a Peru man with elongated skull.Image by Marcel Nyffenegger

The following article and photos appeared in the news site RPP Noticias (Nov. 17, 2011). They talk about it being an alien (that attracts more news readers), but it is a child with the elongated head although it looks quite different from a normal human child. it has particular features that also have been observed with other long heads, such as adult teeth and an open fontanelle.

Cusco: Non-human mummies found in Andahuaylillas, according to anthropologist

Anthropologist Renato Davila Riquelme of the Privado Ritos Andinos museum, located in the district of Andahuaylillas, Quispicanchi province (Cusco), announced the discovery of a mummy with no human characteristics. Dávila Riquelme detailed that the body is 50 centimeters tall, triangular head, too large eyes cavity, open fontanelle, which is only characteristic of children up to 1 year and has molars, which only appears in adult humans. “It has a non-human appearance because the head is triangular and tremendous, what’s more, the head is almost the size of the body and we thought it was a child but Spanish and Russian doctors have come and we have confirmed that it is indeed an extraterrestrial being”.

The following two pictures are from Project Tambo, a combined excavation project in Tiwanaku by several universities.

This mummy is in a curled up position (carbon 14 dated as from the 4th to 7th century). Long and pointy skull.

A long and more rounded skull.

In the 2010 Klaus Dona interview by Bill Ryan (from Project Camelot), which you can find on YouTube, Klaus Dona is showing a find nearby the ancient site of Puma Punku (which is near Tiwanaku, Bolivia). The skeleton was 2.6m long (8.5 feet). The skull is long and, as Klaus points out, this skull does not have the sagittal suture that humans have. Here are the slides from the video:

The most famous ruler in Mexico was Pacal whose body was found inside a temple in Palenque. He dates to the seventh century A.D. he, and others in the Mayan aristocracy had elongated skulls, not the extreme ones as we find in the Paracas people of Peru, but still quite long in regards to a normal human skull. We don’t find that many of then displayed in museums, but there is plenty of clay and stone sculptures that portray the aristocratic members with a rather long skull. Some of these people also display a large nose that starts at the middle of the forehead.

Statue of King Pacal, Palenque, Mexico Pacal had an elongated head, and a particular long nose.

Mayan Lord, with elongated head. Painting based on a terracotta head found in Palenque. Drawing by me, and painting by my wife.

In 1994 Arnoldo Gonzalez discovered the Royal tomb of a 45- to 50- year old woman to the west of Structure XIII, Palenque’s most famous pyramid (Gomez: 2000). The skeleton, which appeared to be about 5’4”, was stained red with cinnabar, and surrounded by bone needles, pearls, obsidian knives, jade, and shells. The cinnabar and luxury items were not the only suggestions of elite status, the Red Queen was also buried with two individuals bearing skeletal markers of having been sacrificed. Analysis of the remains places her in the sixth to late sixth to early seventh centuries A.D. The most likely candidate for the identity of the Red Queen is Queen Tzakbu Ajal, wife of Pacal the Great. This decision came from several factors. Her purported age at death is consistent with that of the Red Queen, as is the fact that she was born outside of Palenque. Also, facial reconstructions from the Red Queen’s skeleton are fairly similar to carvings of Tzakbu Ajal on various tombs in the city (“Queen Tzakbu Ajal: 2007). While her identity cannot be one hundred percent confirmed, the multiple lines of evidence seem solid enough for some researchers to accept them as fact.

Below is the actual skull and a reconstruction of the head.

The skull of the Red Queen of Palenque.

A facial reconstruction of the Red Queen of Palenque whose remains were found in 1994, in a pre-Columbian tomb in the ancient city of Palenque.

Some elongated skulls were found in a small village in Mexico, called Onavas. From the 25 skeletons found, 13 had “deformed” heads. Archeologists cannot accept the possibility of non-human beings, and thus always resort to the idea of cranial deformation, as it is claimed in this find too. Five of them had a different kind of teeth, which they called dental deformation or disfiguration. It is estimated that they died around 1000 years age. One of them was a woman, the rest were men. Article appeared in the DailyMailUK which gave as its source Cristina Garcia Moreno, director of the research project and working on behalf of Arizona State University with approval of the National Institute of Anthropology and History (INAH). I found the original story (in Spanish) on the INAH website under the title Descubren restos de pimas con deformación craneal (released on Dec 19, 2012). The images come from their video.

In the first picture you can clearly see, that the skull has features that are not present in human skulls: The content of the skull is about twice that of a human; the eye sockets are very different, and it has something that looks like a sagittal crest, a thick bony ridge starting between the eyes going up the skull.

This sagittal ridge was also found in the elongated skulls in England. See A Ridge Sagittal Suture in my intro page.

Found in an area of Teotihuacan called Tlailotlacan, an elongated skull from a woman which was an immigrant from the south, and who was around 35 to 40 years old at the time of her death. She had round pyrite stones inserted into her two upper front teeth, as well as a serpentine implant that replaced a lower front tooth.

Original article about this find here. (National Institute of Anthropology and History of Mexico). The following three are from their video.

This photo is from The History Blog, which gives more explanation and higher resolution pictures.

29 skeleton remains were found in the Puyil cave, which is in the Tacotalpa municipality of Tabasco state, located in southern Mexico around 2008.

One is up to 7,000 years old, while the other two are thought to date back around 4,000 years. One of them had an elongated skull. Most were from the Mayan period, but three were much older.

A old print of a drawing of an elongated skull found in Patagonia, Argentina. Print is in the Ethnological State Museum of Berlin, Germany.