4. The Tree Of Life Revised

back to The Kabbalistic Tree Of Life Explored

It is one thing to change the traditional Tree of Life, but how does this impact the other kabbalistic doctrines related to the Tree? With the traditional Tree of Life different kabbalists place certain subjects on the Tree in different ways, without any explanation as to why they do so. For example, the Veil is sometimes placed under Yesod, sometimes above; or the four Worlds are divided differently over the Tree. With the new Tree of Life I will explain why this system allows for a more coherent and meaningful assignment of these issues to the Tree.
First, we have to keep in mind that although Kether is depicted as a Sephirah like all the others, it is actually a direct emanation from the Divine, a Crown that sits upon the Tree of life, as a crown sits on the head of a man, sometimes it is considered a point of light.

When numbering the Sephiroth, Daath gets included, as well as two new Sephiroth above Malkuth. In my opinion, the two new Sephiroth are energy centers that could equal Instincts and Desire, as they are above the physical body but below the realm of Yesod, which among other things is associated with sexual energies.

Path of the Shekinah

We still have the same three pillars, positive, negative and neutral, each containing four Sephiroth.

In the process of emanation and creation, there is the same flow of energy going down the Tree. Every time when the Shekinah rests, a Sephirah is created. When the Shekinah rises, or when one’s consciousness is expanding and rising up the Tree, the reverse path is taken. The flow of energy is all regular, no big leap from Binah to Chockmah, or a sudden vertical fall from Yesod to Malkuth.

This is a much more regular, symmetrical, balanced flow of energy than in the traditional Tree of Life.

With this new Tree of Life we have a real dynamic flow of divine energy throughout the Tree. We have already shown that each world is equally divided over the Tree, and each world has a triad.  I have shown these triads in their traditional form, that is a pair of opposites create a third one, thus we have triangle that points downwards.

With the New Tree of Life we get a more complete picture. Not only do we have four downward pointing triads, but we also have four upward pointing triads. Each world has two triads that interconnect,  actually all the triads are interconnected. That is the dynamic movement up and down the Tree, covering all the Sephiroth and linking all the worlds together. It starts with Kether, the divine light source that produces the first two Sephiroth. Binah and Chockmah create their balance in Daath. That is a traditional triad. But Daath creates Chesed and Geburah, which also is a triad. And the process repeats itself. Not only do we have a dynamic play of forces between the two opposite pillars, between the negative and positive poles of duality; but we also have a dynamic play of forces between the interlocking triangles, creating the four worlds, by repeating the process each time on a lower level/world. It is like a lower world is a reflection of the world above. For the New Tree of Life this is valid for the entire Tree, for all the worlds, for all the Sephiroth, and all the triads.

The Sephiroth on the middle pillar, Yesod, Tiphereth and Daath are the connection points between the triangles as they are each part of two triangles. They are the transfer stations we talked about, the places where one world touches the other, where the energy of one world flows into and is transformed in another. These three Sephirah hold the three worlds together.

Path of the Middle Pillar

There is another argument to make to call them transfer stations, and why the dividing line between the four worlds runs through them. This is based on the traditional explanation of the middle pillar, which is the immediate path to the Divine, and on which the transformation of the individual happens.

When we go down the Tree (on the middle pillar of consciousness), on the path of emanation and creation, we first have Kether, where the divine monad is (what we all are in essence) in unity with the Divine. Then we have Daath where the monad gets knowledge of itself as a separate unity. It is aware of the unity of opposites in the world of Atziluth, including the consciousness of being the opposites of ‘me and the Divine’.

But this divine essence, which has a sense of “I”, looks downwards and wants to create. Not only is the next world, Briah created, but it creates itself the sense of an ego, of being an individual, reflected in Tiphereth. Now it sees itself as the center of the universe, and of the Tree of Life.

Again it wants to express itself even more, and creates the world of Yetzirah, and an animal self in order to experience form and procreation. This happens in Yesod.

Then it is time to go up the Tree, the mystical path of transformation. The first transformation happens in Yesod. It is a basic requirement in all initiatory rites, the first thing to happen is the transformation of the animal self, not by suppression, but becoming aware of the ‘lower’ emotions of passions, desires and sexuality. Then one should learn not to be dominated by these emotions, but to dominate them, to rise above them, to use them when necessary, and to transform the rest of their energies into higher energies. Otherwise one will be bound by animal energies and get nowhere. It is not for nothing that we call people who act primarily from their lower energies ‘animals’. But we should not forget that we all have those animal energies in ourselves. And that it is what makes us survive in the physical world.

Having ‘killed’ the ‘beast’ or ‘dragon’ in ourselves we can truly be called human. Here we are in Tiphereth, and act with higher emotional energies. The emotions and feelings are more refined. In Tiphereth is the sense of ego, and this is the next transformation that needs to happen. The ego is a construct and tries to maintain its existence by reinforcing “I-Me-Mine”. The ego is a necessary value to express ourselves but it keeps us separated from others.  It is when we open up to other people, to other living beings on the planet, to nature, to the energies around us, to the entire universe, that a profound transformation happens. The sense of ego diminishes and one finds oneself as a part of a complex world of beings, like and unlike oneself. Here a person starts to feel that he is one with the universe. Sacrifice of the ego is traditionally symbolized by the crucifixion, which is one the symbols of Tiphereth.

The next transformation happens in Daath when one enters the world of Atziluth. In Daath one not only gains knowledge of his divine self, but one becomes his divine essence. Actually he always has been, but now he has become aware of it again. In Daath he transcends the strong sense of duality that still pervaded his being in the world of Briah, and now he knows the duality is only a perception. Now he sees duality in unity. In Daath he enters into unity. Although there is still a sense of duality between “I” and the Divine, he is in unity with the divine energies and everything that exists. This is a profound transformation called in yoga terms the transformation into the diamond body, it is the realization of the “true essence” of man.

The last transformation happens in Kether where one enters the Divine, not to return anymore.

The Boundaries of the Four Worlds

A word here on the Veil and the Abyss. Information is not available about them. There is not really a veil or an abyss, they are symbols for a transformation, a leap in consciousness, or a leap into another world. There should also be a third boundary that I have called the Wall. I will explain here why there is a third one, why they are all situated on the boundaries between the four Worlds.

Different kabbalists place the Veil on different places, sometimes underneath Tiphereth, sometimes just above or below Yesod. They don’t seem to know just where to put it. What actually is the meaning of those two terms? They are boundaries. A veil or curtain is often used in initiations. Once one has passed the veil or curtain one has stepped into another, hidden world. Like the Veil behind the High priestess in the Tarot. The Abyss has the same meaning. Crossing the Abyss means that one has stepped into another realm. A veil or curtain is made out of cloth, and cloth is the most natural, man-made thing used to cover things up. The genitals (Yesod) is the first area of the body that is covered up with a piece of cloth.

It is my opinion that the Veil on the Tree of Life is situated at the boundary of the world of Assiah and the world of Yetzirah. That is in complete accordance with the traditional meaning of initiating a novice. One leaves the mundane world aside and steps for the first time into the inner realms of the human psyche which lie just beyond the physical. It is called the Veil because a veil covers up something. Lifting a veil or a curtain is like stepping in another room.

The Abyss traditionally is situated underneath Chochmah and Binah, and it is said that Daath lies across it. This corresponds with the boundary of the world of Briah and the world of Atziluth. This boundary is called the Abyss because the transformation that happens here when ascending the Tree is like stepping into an abyss, into a void, into an emptiness of the mind. The exact same terms are used in Buddhism to describe the experience of discovering the divine and true essence of man. This is a real experience, not an abstract concept.

There should be a third boundary between the world of Briah and the world of Yetzirah, which runs through Tiphereth.

I call it the Wall, because here the transformation of the ego happens. Building an ego is like building a stone tower. Living in this self-enclosed tower, it is a wall that separates one from the outer world, that is of feeling one with the rest of creation. It is in our language when we speak of somebody who has built a wall around himself, of breaking down walls between people. The Berlin wall was built to divide people, it was broken down to unite people. Becoming selfless, or sacrificing the ego when ascending the Tree is like breaking down a hard wall, as the ego is tough to dissolve. 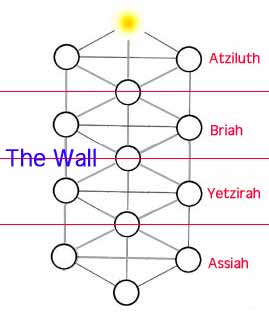